On February 11, 2001 at 8:00 AM, what people thought would never happen did:  Three Rivers Stadium was imploded after 31 years of operation.  Gone by the wayside like the eight track tape, the vacuum tube, and the Commodore 64, Three Rivers was being replaced by two new stadiums for the Pittsburgh Pirates and Pittsburgh Steelers.  PNC Park and Heinz Field began operation that same year. 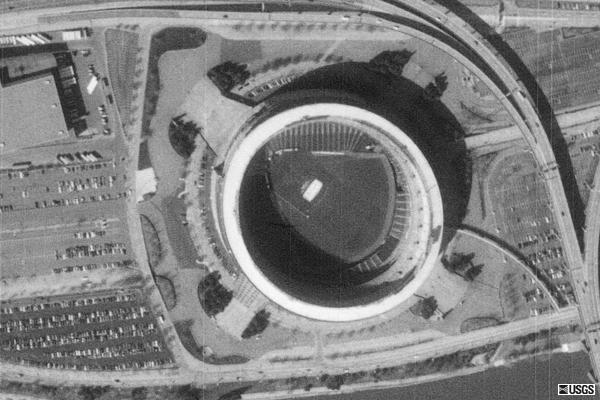 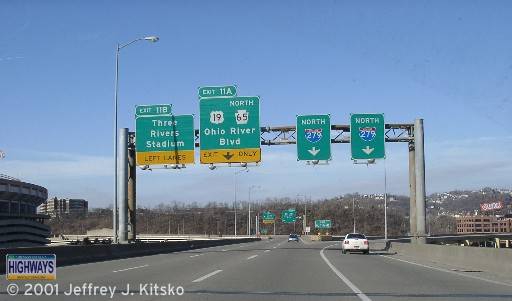 Scene from Interstate 279 northbound, with Three Rivers off to the left.

I can say that I was a part of the history of Three Rivers Stadium.  While I was at KDKA-TV, I was a member of their softball team.  After one of the Sunday afternoon Pirate game in July 1998, we played the charity organization Family House.  In the end, the KDKA All Stars would rise victorious.

The day of the implosion was a very cold one with the temperature in the teens.  However, crowds gathered all around the Golden Triangle.  From Mount Washington to Point State Park, people came to see a bit of history.  Yours truly was one of the many standing in the park on the banks of the Allegheny River to witness the final moments of Three Rivers.

Just before 8 AM, the lucky winner of the Carnegie Science Center raffle to select the person to push the detonation button, former Three Rivers employee Elizabeth King of Mount Washington, did her job.  In a mere 19 seconds, the stadium that stood for almost 31 years fell to the ground into a pile of 8,000 tons of scrap metal and concrete.  Following the final curtain call, the Zambelli International fireworks company put on a display in commemoration of the event.  Controlled Demolition Incorporated, who was in charge of the implosion, reported that it went off without any problems.  The biggest concern was debris falling into Heinz Field which was only 65 feet from Three Rivers.