What some people might not know is that this piece of land, which played a significant part in the struggle for independence, did not see any fighting.  Valley Forge received its name from the iron forge that was constructed along Valley Creek, next to current PA 252, in the 1740s.  A sawmill and grist mill had been built by the time of the encampment, making the area an important supply base for the American fighters.

In the midst of the American Revolution (1775-1783), in 1777, the British devised a plan to capture Philadelphia which had become the de-facto capital of the 13 colonies.  Sir William Howe brought nearly 17,000 British troops into the colonies by having them land at the head of the Chesapeake Bay in Maryland.  General George Washington marched his 12,000-man Continental Army from New Jersey to meet this invasion.  Although their British counterparts won two key battles, as well as Philadelphia, the Americans gained confidence in their fighting abilities and realized they only needed a little more training to reach their full potential.

As winter approached in 1777, Washington had to find a place for his army to make camp.  In doing so, he had to balance the wishes of the Continental Congress to organize a winter campaign to push the British out of Philadelphia with the needs of his weary and poorly supplied men.  By mid-December, General Washington picked the area in Valley Forge to make camp just 20 miles northwest of Philadelphia.  The army would be close enough to maintain pressure on the British forces, yet far away enough to prevent a surprise attack.  One reason that Washington choose the section of land was because it offered natural defenses against such an attack.  He knew the British would not come from the north or the east, because of the Schuylkill River, and not from the west because of Mount Misery.  The only way they could attack Valley Forge would be from the south which would mean suicide for the British forces as the area of the park sits higher than the land to its south and at that time it was open farm land.

On December 19, 1777, about 10,000 troops entered the camp from all of the colonies except for South Carolina and Georgia over Gulph Road from Gulph Mills.  Men, women, and children of all ages, differing backgrounds, and ethnicities came into the camp.  Most were of English decent, but also African, American Indian, Austrian, Dutch, French, Germanic, Irish, Italian, Polish, Portuguese, Prussian, Scottish, Spanish, and Swedish decent were represented.  This would be the last time until the Korean War that people of African decent would fight in the same regiments as their fellow Caucasian soldiers.  The reasons for enlisting ranged from fighting for independence to recent European arrivals who did it for honor and fortune.  In fact, two-thirds of the Pennsylvania regiment was foreign-born.  The women, wives of enlisted men who followed the army year round and some general officer's wives on extended visits, came to the camp to help the cause of independence.  They were compensated for providing valuable services such as sewing, laundering, and nursing.

Rather than wait for assistance, the army began to locate supplies, build 2,000-odd log cabins along planned military avenues to stay in, made clothing and gear, and cooked meals of their own creation.  Provisions were available, but in limited numbers.  Shortages of clothing did cause hardships for some of the troops as General Washington wrote on December 23, 1777, "We have this day no less than 2,873 men in camp unfit for duty because they are barefooted and otherwise naked."  Many soldiers did have a full uniform and the well-equipped units patrolled, foraged, and defended the camp.  The troops also constructed miles of trenches, five earthen forts (redoubts), and a bridge over the Schuylkill River to be used for defenses.

Most think that the cold and snow of the winter or starvation was what killed an estimated 2,500 soldiers, but it the scourge of the camp was actually disease.  Ironically almost two-thirds of them perished during the warmer months of March, April, and May when supplies were more abundant.  Influenza, typhus, typhoid, and dysentery were the most common ailments to spread through the camp.  Dedicated surgeons, capable nurses, smallpox inoculation programs, and sanitation regulations helped to limit the number killed by these virulent attackers.

As time passed, the Continental Army began to mature from a ragtag bunch into a professional fighting force.  They received help in training from charismatic former Prussian army officer Baron von Steuben, who arrived in camp in February 1778.  He drilled the soldiers in a system of field formations, and with this hands-on training program, he managed to mold the army into a streamlined marching machine.

The soldiers received welcomed news on May 6, 1778, when they learned that France aligned itself with and formally recognized the United States as a sovereign nation.  The expected arrival of French forces altered British strategy and triggered their leaving Philadelphia in June 1778.  Washington sent troops forth in the summer months to engage the British troops, and by that time he could claim that the war effort was going in the direction of the colonies.  Valley Forge had become not the darkest time for the Revolutionary War, but rather the turning point in the war for independence.

In 2006, a 107,000 square-foot museum named The American Revolution Center at Valley Forge will open to the public.  It will be carved out of the quarry wall at the western end of the main visitor parking lot.  The center, created by legislation in 1999, will feature the largest known collection of objects, artifacts, and manuscripts from the period of the American Revolution. 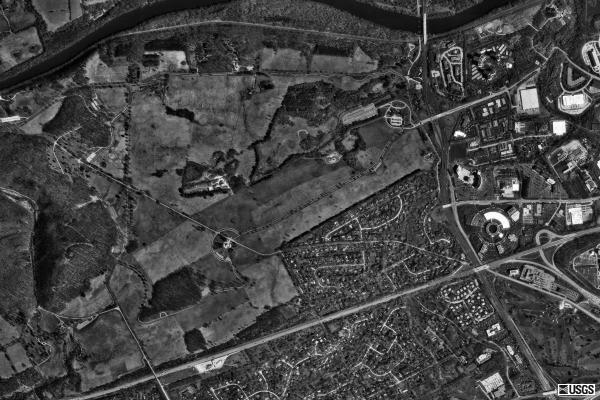 Mini-Bus Tours of Valley Forge
Take a 90-minute guided tour of the park in the air-conditioned comfort of a 20-seat Mini-Bus.  Tours leave the Welcome Center on Thursday, Friday, Saturday, Sunday, and Monday at 10 AM, 12 PM, and 2 PM.  The tour stops at key landmarks such as Muhlenberg Brigade, George Washington's Headquarters (including a tour of the building), and Washington Memorial Chapel.