ATTENTION:  Due to the continuing fire, possible mine subsidence, and gas emissions, people are advised against traveling to Centralia especially those with respiratory problems.  If you do venture there remember that it is still a borough, not a tourist destination, so respect people's property.  The remaining population is friendly and perhaps might even tell you a story or two.

If I said I can show you a town that is continually burning, you would think I was crazy.  However, that has been the case of Centralia, Pennsylvania, which is located in the Anthracite-rich mountains of Columbia County.  Although the town itself is not burning, what is located under it is burning:  coal.

In early 1962, a decision was made to utilize a strip mine near the Odd Fellows Cemetery to become the borough's new landfill as the old one was reaching capacity.  The pit had many holes from previous mining attempts that, according to the Department of Mines and Minerals Industry, would have to be filled with incombustible material.  This was to be done in case a fire broke out, it would not spread to local mines.  With the holes sealed, the pit passed inspection and the Commonwealth issued permit WD-443-R.

The problem that was foreseen and supposedly prevented occurred in May 1962 when a fire, now referred to as "The Incident" by locals, broke out at the landfill.  It was reported and appeared to be extinguished after many flare-ups.  However, a few days later the firemen made a shocking discovery of a hole almost 15 feet long and sever feet high near the north wall of the pit near the cemetery.  It had been hidden under garbage and not sealed as instructed.  This was the gateway for the fire to spread into the mines.

In July 1962, the Department of Environmental Resources began to monitor the fire by drilling boreholes to check the extent and temperature.  Some believe that these provided the fire an easy source of oxygen.

On May 22, 1969, the first three families were moved from Centralia, just as action was being taken to control the blaze.  A trench was dug near the cemetery to stop the spread, but was only performed in one shift per day and halted for the Memorial Day holiday.  If the crews would have worked in three shifts and did not stop, the fire could have been quenched as Tony Gaughan mentioned in the book "Slow Burn."  He added that the project was only $50,000 from completion.

The town was brought to the national spotlight when on February 14, 1981, the ground under which Todd Domboski was playing on in his grandmother's backyard opened.  The hole was about four feet in diameter and approximately 150 feet deep.  He held onto exposed tree roots and was pulled out by his cousin.  Mine subsidence was just one of the dangers facing the residents, along with health and respiratory problems incurred due to the noxious gases emanating from the ground.

By 1983 an ambitious plan was proposed to buy all of the residences out and dig a 500-foot-deep trench around the town to stop the fire from spreading and endangering the Borough of Ashland less than two miles away.  Many former and current residents of Centralia believed that this was a ploy by the federal government to strip-mine the town to get to the rich deposits of coal below.  However, the $660 million price-tag and no guarantee that this would stop the fire made the government balk, and so the fire is left to burn itself out.  The citizens voted in favor of a federal government buy-out 345 to 200.  In November 1983, $42 million was allocated to purchase homes of those who wanted to leave, which was a stark contrast from the $7 million spent from 1962 to 1984 to fight the fire.

In 1991, twenty-six homes along PA 61 west of Centralia were purchased, drawing a close to the chapter of Centralia.  A town which had a population of 1,100 at its height dwindled to 46 with only a few structures left standing, all of which are owned by the Commonwealth of Pennsylvania; however, the residents still have to pay property taxes.  There were 16 properties left by 2006 and two years later that number was down to 11.  The final chapter may be written for Centralia soon enough, as the state is now trying to complete the demolition of the borough 48 years after the fire started.  Steve Fishman, attorney for the Pennsylvania Department of Community and Economic Development, said that "benign neglect" on the parts of state and local officials left the remaining five houses stand with a population of around a dozen by 2010.  He said that the Commonwealth is moving as quickly as it can to take possession of the remaining homes so they can be torn down.  In March 2010, a Columbia County judge will decide how much the owners should be paid for their properties.

In early 1994, due to the movement of the fire, a portion of then PA 54/PA 61 had to be closed south of Centralia because of buckling of the pavement.  PA 54 was eventually moved south to bypass the borough completely and PA 61 was moved to Byrnsville Road, which is located below the original route as seen in the map below.  PennDOT retained ownership of the alignment until 2018 when it was turned over to a subsidiary of coal company Pagnotti Enterprises.

It earned the nickname "Graffiti Highway" after it's surface became covered in it from visitors over the years. 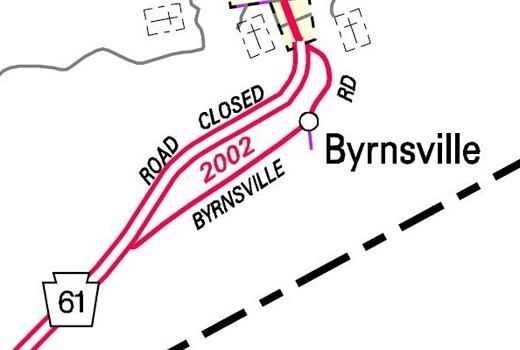 Location of the closed section of PA 61.  (PennDOT)

On April 7, 2020, it was announced that the "Graffiti Highway" would be no more.  Pagnotti Enterprises informed Tom Hynoski, the borough's secretary, fire chief, and EMA director, of their intention to bury the roadway under truckloads of dirt.  "They got sick of the complaints and the liability," he said.  "People steal stuff, they spray paint in the cemetery, it's about time something gets done."  Another reason Pagnotti Enterprises was eager to obliterate the old alignment was due to the COVID-19 pandemic during which activity had increased in the area.