Rise and shine, woodchuck-chuckers it's...GROUNDHOG DAY!  Every year, the eyes of the nation turn to this sleepy village in western Pennsylvania.  Alright, enough quoting the 1993 movie Groundhog Day staring Bill Murray.  However, the eyes of not just the nation but the world in fact turn to the Borough of Punxsutawney every February 2 to see if the most famous weatherman, Punxsutawney Phil, will predict an early spring or six more weeks of winter.

What most do not know is that the celebration of Groundhog Day has its roots in Europe.  Early Christians celebrated Candlemas Day, which was an event when clergy blessed and distributed candles.  During the conquest of Northern Europe, Roman legions brought the tradition to the German people who adopted the practice.  They concluded that if the sun appeared on Candlemas Day, an animal, in this case the hedgehog, would cast a shadow thus predicting six more weeks of inclement weather or a "Second Winter."  Some of the earliest settlers to Pennsylvania were Germans who found a suitable hedgehog counterpart in the groundhog, which are indigenous to most of the Commonwealth.  They determined the groundhog to be an intelligent animal and decided if the sun appeared on February 2, the groundhog would emerge from its underground home, see its shadow, and scurry back inside for another six weeks of winter.

The earliest observance of Groundhog Day was held in private woods close to Punxsutawney in 1886.  The Punxsutawney Spirit newspaper printed the news of that first celebration:  "Today is groundhog day, and up to the time of going to press the beast has not seen his shadow."  The following year, and since then, the site of the yearly prognostication has been Gobbler's Knob.  The members of the Groundhog Club's Inner Circle are charged with awakening Phil from his slumber.  He then speaks to the club president in "Groundhogese," a language that only the sitting president of the Inner Circle can understand.  Then Phil's prediction is translated for the world to hear.  If Phil sees his shadow, its six more weeks of winter and if not, spring is just around the corner.  The tally for the past 136 years has been:

History has also followed Phil through the years.  During Prohibition, Phil threatened to impose 60 weeks of winter if he was not allowed a drink.  In 1958, Phil announced it was a "United States Chucknik" that became the first man-made satellite to orbit the Earth, rather than the USSR's Sputnik.  Phil donned a yellow ribbon in 1981 as a show of support for the American hostages in Iran.  Governor Richard Thornburg was made a lifetime member of the Groundhog Club on January 22, 1986.  Upon receiving the membership, he commented, "I'm overcome."  On March 5, 1986, members of the Groundhog Club and Punxsutawney Chamber of Commerce met with President Ronald Regan.  They presented him with a coin commemorating Phil's 100th year of predicting, a framed picture of Phil, and a cookbook by Elaine Light entitled "Cooking With the Groundhog."  Phil's picture was painted on the side of 200 U-Haul rental trucks in 1991 as part of a promotion by the company.  He helped SEGA of America launch "Sonic the Hedgehog 3" on February 2, 1994.  In 1995, Phil visited with the "queen of talk" Oprah Winfrey on her syndicated talk show.  A year later, Phil entered cyberspace when the first website dedicated to him hit the Internet.  Phil used his prognostication skills in 1997 to predict the winner of Super Bowl XXXII that year for Sprint.  Governor Edward Rendell became the first sitting governor to attend the celebration at Gobbler's Knob in 2003.  Phil's 2009 proclamation included an acknowledgement of his beloved football team, the Pittsburgh Steelers, winning Super Bowl XLIII the night before.  While he wasn't playing in Super Bowl XLIV, Troy Polamalu stared in a commercial that aired during the game for truTV's show NFL Full Contact where he played "Punxsutawney Polamalu" who sees his shadow and predicts six more weeks of football.

The Pennsylvania Lottery has cashed in on the groundhog mystique in 1996 with the "Groundhog Day" instant game.  Eight years later they debuted the series of commercials with the theme "Keep On Scratchin'" featuring Gus, "the second most famous groundhog in Pennsylvania" and current lottery spokeshog. 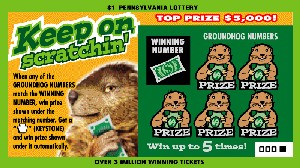 An instant game ticket with a groundhog
theme.  (Pennsylvania Lottery)

Due to the COVID-19 pandemic, the 2021 event was without the normal crowd of revelers in attendance.  Cardboard cut-outs of people were placed in the area in front of the stage where a crowd would have normally been, joined the Inner Circle at Gobbler's Knob.  The live stream compliments of VisitPA had more than 15,000 people watching at one point, showing footage from previous Groundhog Days before Phil's prognostication.  Before that, one of the Inner Circle spoke to how different life was since Groundhog Day 2020.  "People have been referencing Groundhog Day.  It has felt like at times we're all living the same day over and over again.  And while Groundhog Day has come to mean that, Groundhog Day also shows us that the monotony ends.  The cycle will be broken."  He added, "Today actually is Groundhog Day, there's only one.  There is quite literally a new day coming over the horizon."

Even with all of those historic moments, perhaps the biggest "shot-in-the-arm" to the event came in 1993 when Columbia Pictures released Groundhog Day.  The movie, staring Bill Murray and Andie MacDowell, follows the trials and tribulations of weatherman Phil Connors (Murray) in Punxsutawney as he keeps reliving Groundhog Day.  In 1992, Murray visited the borough to research the festivities for the movie and was part of them that year.  A lottery was held on January 23, 1993 for tickets to the preview screening on February 2, with nationwide release ten days later.  Director Harold Ramis, who also makes a cameo as a neurologist, said of the borough, "Punxsutawney's claim as the original weather capital of the world is deserved."  Screenings of the movie take place every year on Groundhog Day as part of the day's festivities.

There is one problem with the movie; even though it is set in Punxsutawney, it was not shot there due to logistics.  The town shown in the movie is actually Woodstock, Illinois, which is located northwest of Chicago.  Confusion sets in when people who have seen the movie come to the real Punxsutawney and think Barclay Square in downtown is Gobbler's Knob as it was portrayed in the movie.

In the movie, Bill Murray plays Action News' weatherman Phil Connors from WPBH-TV in Pittsburgh.  When I attended the celebration in 2005, I got to meet the real Action News weatherman, WTAE-TV's Don Schwenneker.  Unlike Phil in the movie, Don did make it back to Pittsburgh for the five o'clock news.