While this route was created in 1926 along with the others, it was only signed from Lewistown to Selinsgrove.  A year later it would be signed from Maryland to Lewistown and replace another US designation, US 622, from McConnellsburg to Mount Union.  In 1929, the highway was under construction from Needmore to Webster Mills and completed the following year.  Also in 1930, the route was paved from Warfordsburg to Needmore.

In 1960, construction began on a section of I-70 near Warfordsburg from the Maryland state line to Exit 168.  This would eventually become a part of the new route for US 522 from Maryland into Pennsylvania.  In 1961, this opened to traffic and the designation moved off Buck Valley Road onto the new Interstate.

In 1974, the designation was moved from Market Street, Valley Street, and Walnut Street and placed on Juniata Street and Charles Street to the multiplex with US 322 in Lewistown.  In 1977, the northern terminus was extended one mile north to intersect US 11/US 15 at the new Selinsgrove Bypass.  A year later the designation was routed to bypass Beaver Springs, where it was previously signed on Gross Road and Centre Avenue.

In 1999, a new alignment opened to the east of Mount Union from Allenport to US 22.  The designation was removed from Shirley Street and North Jefferson Street in Mount Union.

A groundbreaking ceremony on March 31, 2000 signaled the beginning of construction on the Northern Lewistown Bypass, with the first section involving widening and repaving four miles of US 22/US 522 from Wakefield Road to Airport Hill Road which began in April 2000 and finished in 2003.  The next section involved building the expressway from south of Country Lane to the high-speed interchange at US 322 as well as rehabilitating three miles of it in the interchange area and constructing a new Electric Avenue interchange, all of which began in January 2001.  The section from Airport Hill Road to just south of Country Lane began in January 2002.

A "Roll & Stroll" community day was held on October 15, 2005 which allowed local residents to walk or bike down the new expressway from 12 PM to 4 PM.  A dedication was held between Caldwell Hill Road US 322 which unveiled the official name of the bypass as the Vietnam Veterans Memorial Highway. 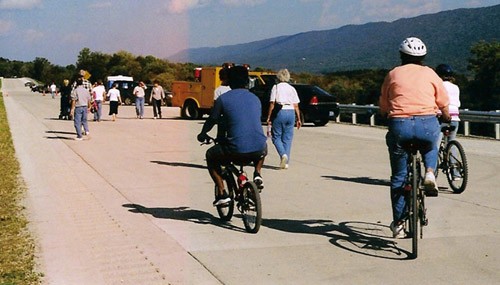 The 12 new miles of expressway and ramps cost more than $130 million and opened on November 21, 2005.  A ceremony attended by local officials and the media took place between Caldwell Hill Road and the Electric Avenue interchange. 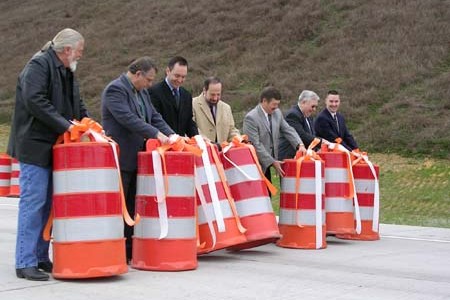 The last piece to open was the entire Industrial Park interchange which toke place in 2006.