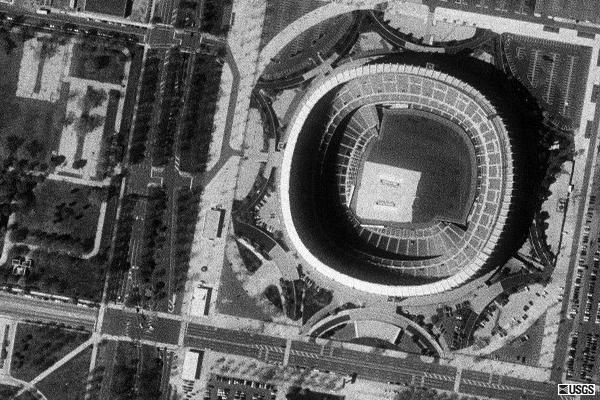 The day of the implosion was a very temperate one, being the first day of Spring.  Much warmer than when its contemporary across the state, Three Rivers, was taken down three years earlier.  Even with the Philadelphia Police Department pleading with people not to come view it in person, but rather to stay home and watch it on TV, crowds gathered where ever they could in South Philadelphia.  Yours truly was one of the many on the northern side of the Schuylkill Expressway to view the final moments of Veterans Stadium.

Around a quarter to seven, Phillies' public address announcer Dan Baker began the ceremony.  At 7 AM, Philadelphia Mayor John Street was joined at the ceremonial red plunger by ex-Phillies' slugger Greg "The Bull" Luzinski, member of the 1980 World Series team, and the Phillie Phanatic, famous mascot of Major League Baseball's Phillies.  It took a little over a minute for the structure to "domino" to the ground into a pile of 70,000 cubic yards of scrap metal and concrete.  Following the final curtain call, Dan Baker returned to the microphone to say to the cheering crowd, "Ladies and gentlemen, you just witnessed history."  Afterwards one onlooker played Taps on a silver trumpet.  Demolition Dynamics who was in charge of the implosion, reported that it went off without any problems.

Special thanks to Rita Franco, who allowed me to take pictures of the implosion from her walkway.