It is one of the first Interstate to be completed from border to border in Pennsylvania.  OK, so it was only 46 miles long and is only in one county, but who's paying attention?  Actually, the real reason that it was completed so fast was that it had help from the Pennsylvania Turnpike Commission.

Prior to the signing of the bill that ushered in the era of the Dwight D. Eisenhower System of Interstate and Defense Highways, the PTC had envisioned a similar plan but in the scale of Pennsylvania.  During the 1940s and 1950s, many highways were proposed as toll expressways and so was this one which would be known as the Northwestern Extension.  It was even shown on the 1956 Pennsylvania Turnpike map as under construction; however, on the 1957 it was not shown at all.  What a difference a year makes!

By the time the bill was signed by President Eisenhower on June 29, 1956, the status on this section of highway had gone from preliminary design to final design.  When the legislation went into effect, the Turnpike engineers packed all of their plans, correspondence, and soil reports and shipped them to the Department of Highways.  Most of the other proposed highways ended up the same way, as Interstates.

Construction on the entire route began in 1958.  In 1959, the state of Ohio began to build their section of I-90 up to the border.  They did not open their section and what happened was a repeat of when the Pennsylvania Turnpike opened to the Ohio/Pennsylvania border and dumped cars into Petersburg, Ohio.  The first section of I-90 opened from the Ohio border to Exit 6 on June 1, 1960.  The section from Exit 6 to the New York border opened on October 28, 1960 at 10 AM.  The ribbon-cutting ceremony began with a motorcade over the newly opened expressway that began at Exit 24.  A luncheon, also a part of the ceremonies, was attended by more than 200 local, state, and federal dignitaries at the Lawrence Hotel in Erie.

Secretary of Highways, Paul H. Martin spoke at the luncheon.  He said that the Thruway had accomplished two basic requirements:  "It removes the heavy flow of through traffic from urban streets; and it reduces the time consumed in travel between New York and Ohio.  He went on to say that "When the Pittsburgh-Erie expressway [I-79] is built, the economy and resources of Erie and this section of Pennsylvania will be further enriched." 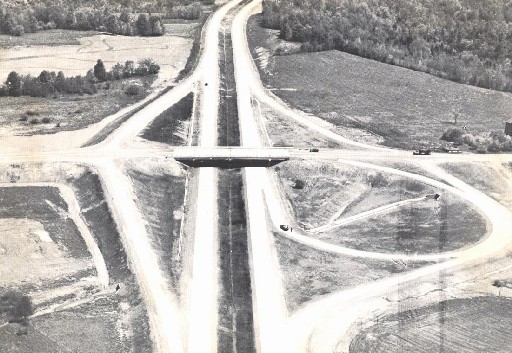 Facing eastbound on the then uncompleted I-90.
(Pennsylvania Department of Highways)

When it opened, the Interstate had a speed limit of 50 MPH, which was 10 MPH lower than ones on New York state or Ohio expressways.  However, Martin mentioned that it would be temporary.

Finally, this interstate is finished undergoing a major overhaul.  The project included every section from the Ohio Line to the New York Line.  It seemed that every time I went to Canada, this highway was under construction.  The construction concluded in 1999 and the highway is back to the way it is supposed to be:  whole.