Another of the more famous roads, US 40 follows the same path as the National Road.  The National Road was created by the United States government under the advisement of President Thomas Jefferson in 1806 to provide a route from the settled eastern seaboard into the central part of the country to open up the Midwest for settlement.  It was the first Federally-funded interstate highway which ran from Baltimore, Maryland to Vandalia, Illinois. 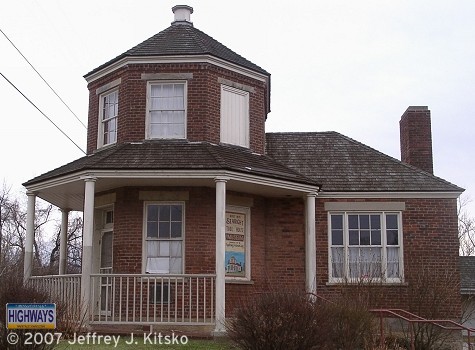 Searight's Tollhouse was one of numerous collection points for tolls.

Originally, US 40 spanned the country from Atlantic City, New Jersey to San Francisco, California.  With the advent of the Interstate system, the route was truncated to Park City, Utah and its remaining length to the "City by the Bay" was supplanted by Interstate 80.

The first change in the routing took place in 1938, when the designation was moved to Chestnut Street and Main Street in Washington.  In 1939, the highway was widened from Washington to Pancake which is now known as Laboratory.

The 1940s came with more work done to improve the highway with widening projects taking place from Elwood Park to Washington, Beallsville to Suzy Lane, New Salem Road to Uniontown, Beaver Creek Road to Elk Park, and Addison to the Maryland state line in the first year of the decade.  The following year the section from Elk Park to PA 281 south was widened.  In 1946, the highway was widened from McKee Road to Elwood Park, Hopwood to Wharton Furnace Road, and Lakeside Road to Newberry Road.  In 1948, the new Youghiogheny Reservoir Bridge opened to traffic.  The former alignment can still be seen when the level of the lake is low.  One aspect that can be seen is the National Road bridge that crossed the river at the village of Somerfield, which was demolished to make way for the lake.  Widening of the alignment took place from PA 281 south to the bridge and from there to Lakeside Road. 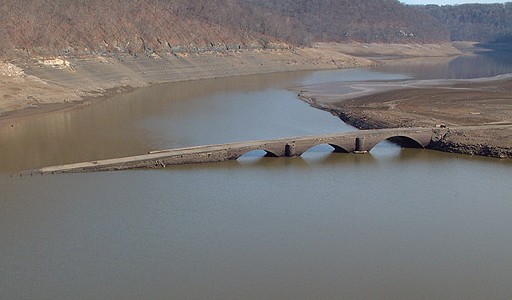 Widening work continued into the 1950s with the section from Wilkins Hollow Road to Addison being completed in 1950.  In 1958, a median was installed at the intersection with New Salem Road and from PA 281 north to Mud Pike.  That year the route changed course in Washington to follow Maiden Street, Franklin Street, Beau Street, and Jefferson Street and replace "THRU US 40."

The 1960s saw construction beginning on the first section of expressway for US 40 from Daisytown Road to Market Street in 1962.  The following year, this section which also included the Lane Bane Bridge over the Monongahela River opened.  The designation was removed from National Pike, Bridge Street, and High Street.  Construction began in 1968 on the section from Broadway Street to PA 166 which opened the following year but did not receive the US 40 designation for another two years.  Also opening in 1969 was the new alignment between Beau Street and Franklin Street in Washington, which included widening and installing a median on Jefferson Avenue between Chestnut Street and Beau Street.

In 1972, a median was installed from Hopwood to Wharton Furnace Road.  An odd occurrence took place in 1975, when the southern Uniontown bypass was shown on the PennDOT map as being under construction.  However, two years later it was removed from the map. 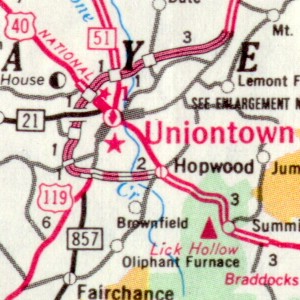 It would not be until 1991 when construction would actually begin on this section as a part of the Mon-Fayette Expressway, when work began on the Chadville Demonstration Project.  In 1994, this southern bypass opened and received the US 40 designation which was removed from West Main Street, East Main Street, and Fayette Street through downtown Uniontown.  For a commentary on the end of the bypass, see the Roadrash page.

The end of the southern bypass east of Uniontown.  (C. C. Slater)

There are efforts underway to get US 40 designated a federal All-American Road, which would mean millions of dollars to develop tourism along the highway.  There are problems that have arisen with all of this good news.  The National Road Heritage Park Commission, who does most of the paperwork, lacks elements of leadership such as an executive director.  PennDOT District 12 Engineer Michael Duffalla has cautioned other board members to proceed slowly, fearing that this designation would delay or block improvements.  If the highway gets the federal designation, it could mean advertising and marketing the highway across the country and be used as leverage to gain federal, state, and private development dollars.  Some of the highways currently designated All-American Roads are the Pacific Coast Highway in California, the San Juan Skyway in Colorado, and the highway taken by civil rights marchers from Birmingham to Montgomery, Alabama.

On June 13, 2002, United States Transportation Secretary Norman Y. Mineta announced that US 40 in Pennsylvania, along with 12 others across the country, became All-American Roads and 23 National Scenic Byways were added to the list of America's Byways.  The designation gives the National Road Heritage Park access to new grants.  Transportation Secretary Allen D. Biehler along with other state and local officials, cut a ceremonial ribbon on May 8, 2003, to officially mark the National Road as a National Scenic Byway "All-American Road."  Donna Holdorf, executive director of the National Road Heritage Corridor, said the designation will give her organization about $24 million to promote tourism to the area.  The ceremony was held on the "S" Bridge in Buffalo Township in Washington County.

Construction on a new bridge across the Youghiogheny Reservoir began on October 6, 2003.  The $25,380,707.71 project entailed building a new, eight span, 1,730 foot-long bridge north of the former one and then demolishing the former span.  The project concluded on October 7, 2005 when the bridge officially opened to traffic but paving the approaches did not finish until May 2006.

After having sat idle for 39 years, the expressway stub east of Brownsville ceased to be on December 5, 2007.  Prior to that date, traffic had to exit/enter and negotiate a traffic signal at PA 166.  The new alignment, which was built as part of the Mon-Fayette Expressway project and will provide access to one of PA Turnpike 43's interchanges, is three lanes built on a five lane alignment with one being a center turning lane because Redstone Township would like to develop that area.  The contract for construction was awarded on June 6, 2006 to New Enterprise Stone & Lime Company of New Enterprise, Pennsylvania for $33,503,565.

A segment of National Road history was discovered in August 2008 during construction of the Mon-Fayette Expressway near Brownsville.  During excavation for a bridge near the Brownsville Drive-In, workers unearthed an intact slab of former pavement.  As part of an agreement with the Pennsylvania Turnpike Commission, the National Road Heritage Corridor was contacted about the find.  The cube-like slab, comprised of soil, crushed limestone, asphalt, and pavement, was the first piece of the National Road ever to be removed intact, said National Road Heritage Corridor Executive Director Donna Holdorf.  Workers from Golden Triangle Construction Company, the contractors working on the expressway, helped to crate and transport the slab to storage and eventual display at Fort Necessity.  The multi-layered, four-foot-deep piece will help transportation scholars understand the history of the road.  "The slab of stratigraphy reveals, in a small way, the complete history of the National Road," said Ryan Rowles, regional archaeologist for PennDOT.  "It's a window into the history of transportation in our region."