The first plan to get this expressway built was spearheaded by State Representative George F. Pott of Gibsonia in 1981.  He sponsored a bill that would provide $540 million to build not only this expressway, but also an expressway from Warrendale to Interstate 70 at Charleroi that would be the equivalent of an Interstate 279 and Mon-Fayette Expressway combination.  His bill did not pass in the legislature, and so the project sat on the shelf.  Even if it would be built, no one knew who would do the job:  PennDOT or the PTC.  It would not be until the passage of Act 61 in September 1985 that action would be taken to see the completion of the Beaver Valley Expressway, as the new $807 bond helped to get several projects started or re-started. 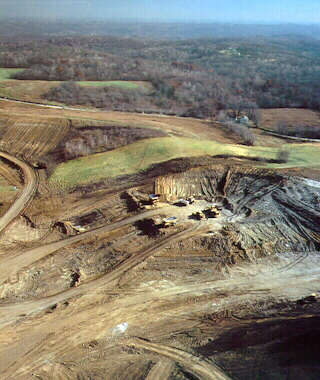 On June 14, 1990, ground was broken for the first major Turnpike expansion since the construction of the Northeast Extension in 1958 and the first Turnpike project in Western Pennsylvania since the Western Extension.  Governor Robert P. Casey, state legislators, and the Pennsylvania Turnpike Commissioners attended the ceremony.

The expressway would be the missing link in then PA 60 between PA 51 near Beaver Falls and US 422 in New Castle.  For years, in order to travel to New Castle from Beaver Falls, one had to take PA 18.  The first section to open, from US 422 to PA 108 which included the Mahoning River Bridge, opened on November 8, 1991.  The 1,700-foot-long span surpassed the Beaver River Bridge on the Turnpike's main line as is the longest in the system.  The rest of the highway opened on November 20, 1992 with the total cost coming to $243 million.  Due to aircraft trouble, Governor Casey could not make the ceremony, but addressed the crowd via a cellular phone.  Senator James E. Ross, for whom the highway is named, spoke of the optimism that he had for the economic development that would be attracted.  He then proceeded to cut the ribbon to open the expressway.

Traffic began to use the highway officially at 2:00 PM and cuts the travel time from Pittsburgh to the New Castle area.  Also, it provides a connection to the Pittsburgh International Airport. The best feature of the road, being a resident of the Commonwealth, is that it was completed on time and UNDER budget.  To "cash-in", pardon the pun, on the new highway to attract customers, some of the Sharon retailers advertised that they would reimburse anyone who came to shop at their establishments the $3 roundtrip toll.

Thanksgiving travelers got an early present on November 24 when toll collectors and maintenance personnel walked off the job for the first time in 64 years at 4 AM, forcing the PTC to wave tolls on the busiest day of the year.  Teamsters Local 77 and 250 walked off the job due to not receiving raises unlike non-union employees.  The Commission offered a raise of $21 per hour over three years, fully paid health care package, 15 paid holidays, an average of four weeks of vacation a year, and a no-layoff clause for three years.  The union rejected the offer, but would not comment on the reason.  No tolls were collected on the expressway.  A tentative agreement was reached through negotiating sessions that began November 29 at 2:30 PM and ended on November 30 around 10 PM, ending the seven day strike.  Tolls were reinstated at 9 AM on December 1, 2004.

On October 17, 2005, US Senator Rick Santorum and US Representative Melissa Hart made an announcement at Pittsburgh International Airport that has been years in coming.  By January 1, 2009, the Interstate 376 designation would extend from Pittsburgh include the James E. Ross Highway and north to New Castle under the "Safe, Accountable, Flexible, Efficient Transportation Equity Act: A Legacy for Users" highway reauthorization bill passed two months earlier.  PA Turnpike 60 shields were replaced with Interstate 376 shields, and a first for a highway in Pennsylvania, included on the assemblies were black-on-yellow "TOLL" auxiliary signs that were approved for use in the 2009 Federal Manual of Uniform of Traffic Control Devices.  Due to the conversion to Toll Interstate 376, the expressway changed from a north-south route to an east-west route, and for the second time in a decade, its exit numbers changed, with all of the changes completed by August 1, 2010.

The E-ZPass drought on the expressway will finally come to an end this year.  On March 16, 2006, the PTC announced that the mainline toll plazas and then the toll ramps would be retrofitted that year after similar work concluded on PA Turnpike 66.  Where there are two or more toll lanes, at least one is designated E-ZPass only.  The old coin-drop equipment was replaced with new machines, such as found at PA Turnpike 43's Jefferson Hills Toll Plaza, that can provide change up to $5 and issue receipts.  The cost of signs, upgrading ramps, electronics, new coin-drop machines and associated equipment was $15.7 million.  All work was completed by the end of that year.  PTC Spokesman Bill Capone said, "We hear from many people who use the extensions but who haven't been motivated to enroll in E-ZPass."

The Turnpike Commission had been studying going to an all-electronic toll collection system for years, and the James E. Ross Highway became the first of their roadways to convert entirely.  In the spring of 2017, E-ZPass tag readers, as well as cameras to photograph license plates of vehicles without the electronic toll tag (which would receive a bill in the mail for the amount of the toll under), were installed in all toll plaza lanes.  The conversion was all dependent on how well the debut in January 2016 of all-electronic toll collection at the Delaware River Bridge on the mainline Turnpike near Bristol went.  Pennsylvania Turnpike Commission spokesman Bill Capone said, "The schedule's highly dependent on how things go with the conversion of the bridge," and added about the entire system going cashless, "to say you want to do it is one thing, but it's a pretty significant undertaking."  PA Turnpike 376 was the ideal candidate for testing an entire highway going cashless because it used existing facilities unlike the open road tolling at the Delaware River Bridge, it is located in a rural area and close enough to the Ohio border to provide a mix of in-state and out-of-state drivers, and provides a better evaluation of the TOLL BY PLATE system because E-ZPass usage is lighter in the area.  The first day of all-electronic toll collection was April 30, 2017.